I am self-publishing a book about my career as a developer, technical founder, and entrepreneur: Entreprenerd, Building a Multi-Million-Dollar Business with Open Source Software. It's not the first book I'm publishing, but it's the first time that I invested in a copy editor, proofreaders, a typesetter, a photographer, and a cover designer. I want Entreprenerd to be the best book I can produce. The manuscript is now with the typesetter who will apply the last fixes; once he returns the copy, I can upload my book to the print-on-demand services I have selected: first, I'll use Blurb for the hardcover version; then, I'll use Amazon KDP for the paperback. I'll make the hardcover available on the Global Retail Network; the paperback will only be available on Amazon.

To prepare for Entreprenerd, I wrote about 50 short stories in English, and I made a selection of 28 stories that I bundled in a book Reflection Infection that I used to test different print-on-demand services, lulu.com, Blurb, and Amazon KDP. Although the quality of the books produced by Amazon KDP wasn't as good as the quality offered by lulu.com and Blurb, I decided in favor of Amazon KDP because of the price. For the hardcover version, I had to choose between lulu.com and Blurb. I chose Blurb because I used this service for the books I wrote in Dutch and their support is excellent. There's only one problem: Blurb uses UPS as its shipping partner, and I'm sorry to say so, but UPS is the worst.

I placed an order for 5 copies of Reflection Infection and 10 copies of my Dutch book Gebeten on February 26, 2021. Blurb shipped the books in two packages on March 3 and March 5. Today, we are April 28, and I still haven't received those packages. In the meantime, Blurb was kind enough to print another five copies of Reflection Infection (free of charge) so that I could do the quality control and go ahead and experiment with the Global Retail Network. Nevertheless, this doesn't free UPS from its obligation to deliver the packages.

Let's start with the 5 copies of Reflection Infection. As soon as they were shipped, I received a message that they would be delivered om March 8. I made sure that I was at home that day, but I waited in vain for the package to arrive. I consulted the online tracking information, and for a long time, the status wasn't changed. The last known location of the package was Stanford Le Hope in the UK on March 5. For a long time, the delivery date didn't change, until I complained. I was told that the package hadn't been scanned since March 5 and the message on the tracker changed to "Package Status Not Available". 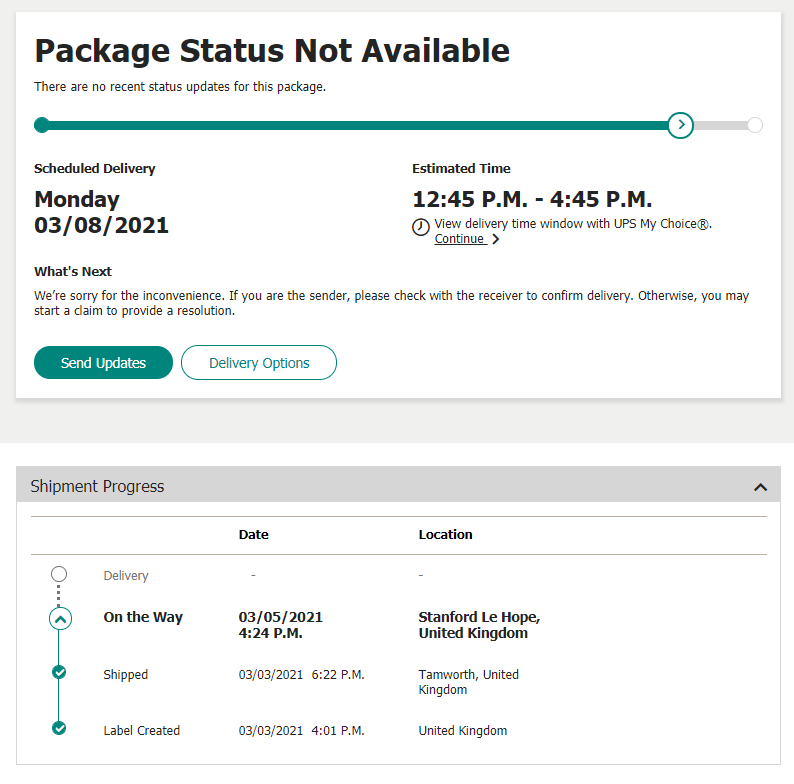 When I asked if the package got lost, I was told that an investigation had to be started, but UPS doesn't allow the receiver of a package to request such an investigation; only the sender can do this. I informed Blurb and they filed a request after March 16, but before March 24. I consulted the FAQ at UPS where I found the following information:

It took UPS until April 13, to finally start the investigation. That's more than 10 days after the claim had been issued. In the meantime, eleven business days have passed. Will UPS meet the deadline of 8 to 15 business days as advertised in their FAQ? Maybe, but does that really matter? In which universe does it take a shipping provider two months to deliver a package?

The same goes for the second package with the 10 copies of Gebeten, although the itinerary of that package is somewhat different.

The first part of its voyage went well: 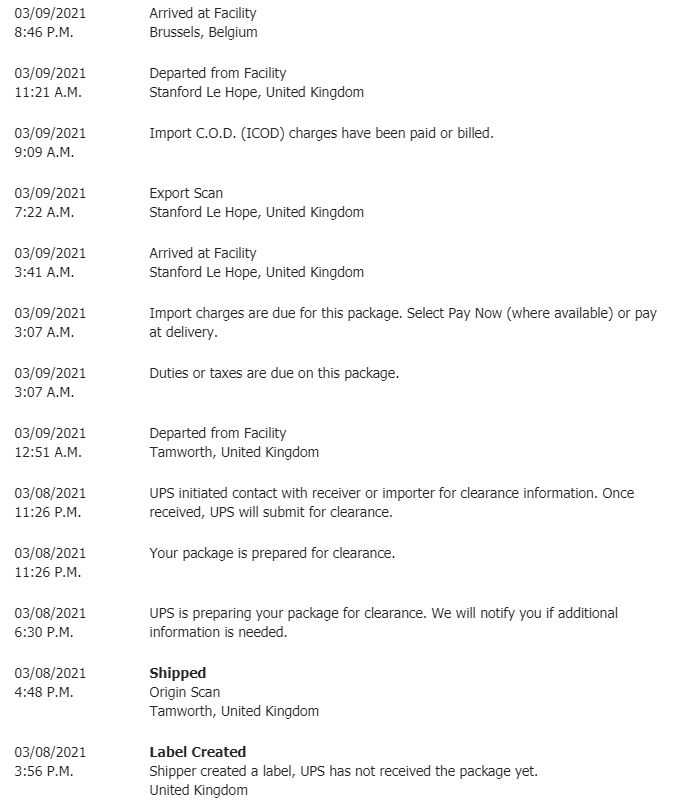 It was processed on March 8, but on March 9, I was informed that Import costs were due—these were introduced with the Brexit. I paid these costs immediately, and yes, my company has a valid EORI number that allows me to import from and export to the UK. On the same day, March 9, the package arrived in Brussels. I received a message that it was going to be delivered on March 12. As you can tell from the date and the title of this blog post, this package is currently still in Brussels. It has been there for fifty days already!

When I asked support at UPS what was happening, everyone was blamed but UPS. They blamed the sender for not providing sufficient information, they blamed customs,... Blurb insisted on giving me an ETA for the package and this is reflected in the "shipment progress" (which progress? one might wonder) on April 5. The package was being held for a future delivery data and UPS was going to attempt to deliver on the date requested, but I didn't get any information on what that date might be. 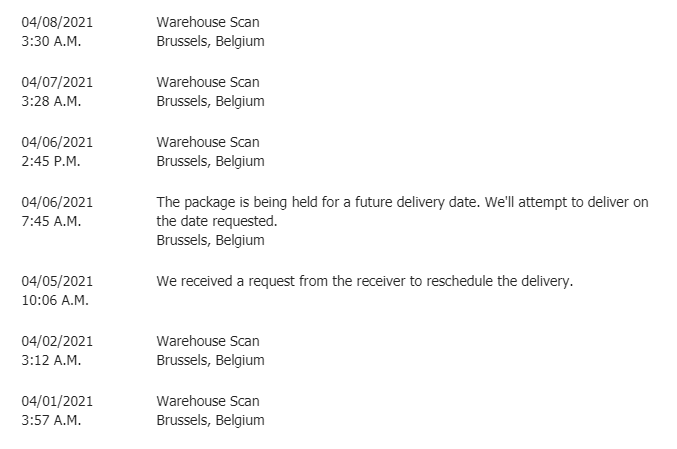 When Blurb informed what was happening, UPS claimed that the receiver—that would be me—had requested an alternate delivery address. This had caused an extra delay. I was quite surprised by this allegation. I never asked to change the address. Also, when Blurb checked with UPS about the "alternate delivery address," it wasn't different from the address on the original order and invoice. In other words: UPS's allegation was false. 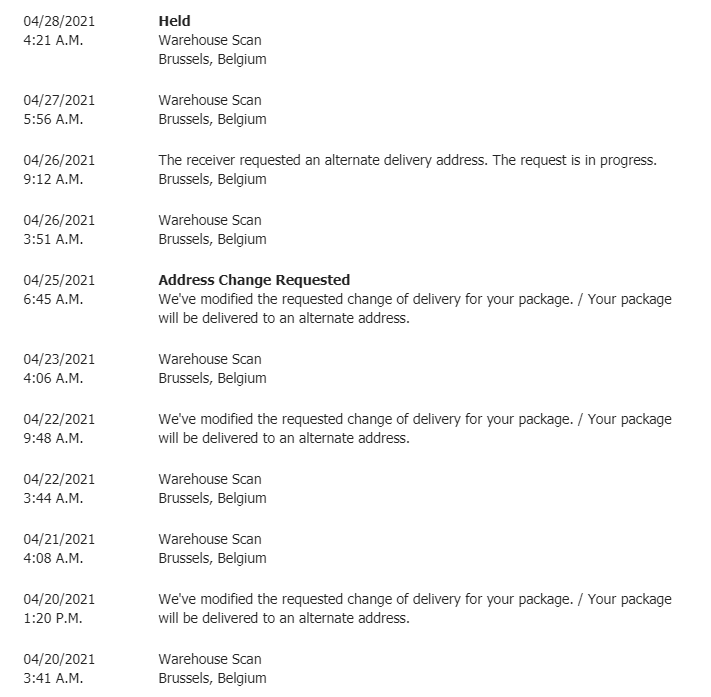 I asked UPS where I could file a complaint, but I received the answer that I already filed a complaint when I contacted support.

Blurb also contacted UPS multiple times, and this is what Blurb told me yesterday (March 27):

To our request for detailed information on Thursday, UPS replied that there are no further documents or information to provide to release your order. All necessary paperwork has been submitted for clearance. On Sunday they informed us that they contacted their local team in Belgium to request the delivery to be scheduled but are unable to give us a day/time. They admit that because of the overwhelming volume of packages that the customs is trying to clear, this package cannot be delivered in a timely manner.

It seems that UPS points at customs as the main culprit, but that's not an acceptable explanation, because:

I am now in stress, because I hope to release my new book Entreprenerd in the next couple of weeks. As soon as I received the PDF of the manuscript, I'll order a test copy so that I can do a quality check. I don't want to release the book before I've received a first copy myself. However, despite the bad experiences with UPS, Blurb will still be using UPS as its shipping partner. I really don't understand why anyone would still do that.

In the meantime, I've read the reviews on Trustpilot where UPS gets an average score of 1.2 out of 5. After taking the screen shot, I wrote a review myself. Next month, the packages will be underway for two months. I think it's only normal that I ran out of patience. 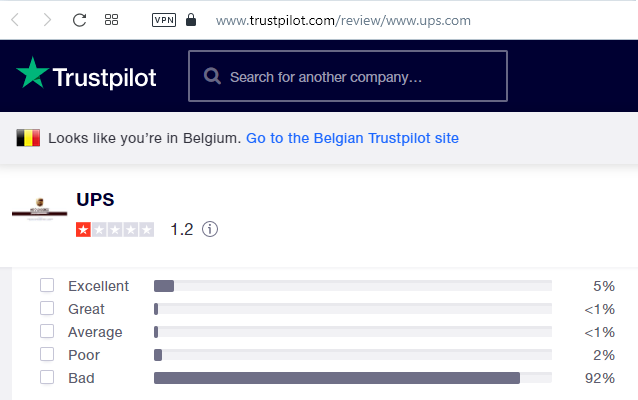 If someone at UPS reads this, please contact me on my Twitter account where I already posted a message on April 8, but make sure you can tell me that the problem has been solved, e.g. by reimbursing Blurb in full for the packages that you fail to deliver.

Today, on May 6, I finally received the ten books that were stuck in Brussels since March 9. I received a phone call from UPS yesterday, asking me for the EORI number of my company. That number was validated during the call and the package was finally released. It could have saved everyone plenty of time if someone at UPS had identified the problem at an earlier stage. Both the sender and I kept asking if UPS needed more information about the shipment, but we were assured this wasn't the case until yesterday evening. Let's hope this doesn't happen too often in the future.

The other package for which an investigation was started by UPS is still missing, but as the sender fully reimbursed me for that shipment, I consider this case as closed. According to UPS, it's delayed due to operational conditions. If you ever show up more than two months late for your work, you know what to say: "I'm very sorry, I was delayed due to operational conditions." 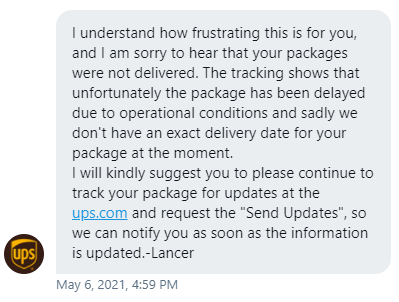 We're May 14 and there's still no update on the second package.